“In Sinjar, we have pool,” he shared as we walked up the rugged road to the mission’s main house at dusk. “My friends, me would jump off the top of the house to the pool. Very beautiful. I miss it.”

My companion on this walk was a 9-year-old boy I’ll call Aiden I’d gotten to know over the previous week. We were coming from his house–or rather, the structure where he and his family had been living for the past 15 months. Though considered comfortable for the refugees in the village (i.e. a metal door, window covering on two windows, and cement floors), his current dwelling was far from the home he spoke of.

The temperatures were dropping quickly. We could see our breath and shivered as we hurried along. The forecast called for rain and low temps the next several days. I had found that when it rained there, it poured. Cold in Iraq was different from the Minnesota winters I was used to; though the temps outdoors were similar, there was a vast divide between the comfort of my Minnesotan home and an Iraqi village lacking electricity and warmth.

The next morning, my alarm rang at 5:45 am. The trailer I slept in hadn’t had electricity overnight. Or if it did, the heat it provided temporarily was no longer with us.

In the darkness of the trailer, as I pulled the heavy blanket over my head, I prayed for the families I had been visiting and teaching. I was cold, really cold. But I know they are colder.

A typical dwelling of a Yezidi family. One structure like this in the village had 13 families living in it.

After being in Iraq for two weeks, I realized so many of the Yezidi people I visited and taught daily were more like me than I could have imagined. Some spoke four languages, some were teachers. Others were educated, skilled workers, or mothers caring for their children. And yet, here they were, their lives as they knew them in shambles — living in cold, unfinished cement walls with dirt floors, trying to physically and mentally wait out ISIS’s occupation of their home.

Most of the people in this particular village left their homes abruptly, their earthly fortunes lost. Families and lives torn apart thru this genocide. 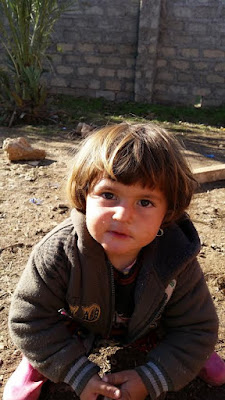 Money is obviously tight for nearly all these families. Already struggling to feed their families, now they face another crisis, a bone-chilling cold that has already settled into the village and torments them. The forecast upon my departure had lows of 17 degrees Fahrenheit.

Since returning to the States, I’ve been processing this problem facing my new friends. What can I do, what can we do from our cozy homes to help these people who have in many ways stolen my heart? I am strongly compelled to help. I experienced this cold firsthand–and though it wasn’t yet 17 degrees,  it was FRIGID.

After getting to know the very people affected–people literally freezing because of a lack of kerosene–I cannot NOT help, both on a personal level and by raising awareness to their problem. Their faces are etched in my heart. I held this little girl on many occasions. She was incredibly sweet. To think of her without heat right now is heart-wrenching.

The organization equipped to help on the ground is called Plain Compassion Crisis Response. This group of people is caring for the refugees in this village, helping with many different needs which have arisen. They are currently working to set up kerosene distributions for each of the cold spells over the winter months to keep the families warm. In the words of the on-the-ground team I worked with, “Just $11 is enough to heat one family for a week if they use it sparingly. It will not likely, consistently, be unbearably cold throughout the winter so at this point we are hoping to just do a distribution right before every severe cold spell. But at any rate there will need to be probably 8 to 12 distributions to get them through till spring. If we just do one jug for an entire house (which is really not nearly enough) it will cost about $3,500 per distribution.”

If you’d like to contribute to PCCR, you can donate online here (they also have an address at that link, in case you prefer to senda check). In addition, although they don’t have a lot on their site (for security reasons, given where they are working), they send out detailed email updates about current projects — you can subscribe to receive those here.